For most energy technologies, cost decreases with as the cumulative amount of deployment increases. Often, the cost is seen to decrease approximately the same amount with each doubling of the amount deployed. Straight line curve fits to cost data are commonly known as ‘learning curves’ and look like this:

Fig. 1. (from Shayegh et al., 2017) Learning curves for clean and conventional energy technologies. The horizontal axis represents cumulative quantity of electricity generation and the vertical axis represents the unit cost of electricity generation. Both scales are logarithmic. Learning rates (R) are shown in parentheses. Q0 indicates starting quantity and C0 is starting cost. With this axis scaling, straight lines represent power laws (Eq. (1)). We use data from this figure for subsequent analysis of the impact of different types of R&D (EIA, 2015, Wene, 2000 ; Rubin et al., 2015).

The idea is that as more of a technology gets deployed, people learn how to make the technology more cheaply, although economies of scale and other factors also play roles in bringing down costs.

I had the good fortune to be in a discussion with venture capitalists who were investing in companies doing research and development (R&D) on energy technologies. They mentioned that they didn’t want their R&D investment to just push them down the learning curve — they didn’t want to just learn things that they would have learned as production scaled up.

They said they want to shift the learning curve downward. They wanted to invest in innovations that would decrease cost as a result of innovations that would not come about simply by scaling up manufacture. (For example, maybe by shifting solar photovoltaic cells to a new kind of substrate.) This raises the question: If an R&D investment could reduce cost by the same amount by shifting the cost-starting-point of the learning curve downward (“curve-shifting R&D”) instead of effectively following the learning curve to that cost (“curve-following R&D”), which one would be better and how much better would it be?

To address this question, I got the help of Soheil Shayegh, a specialist in optimization and other mathematical and technical arts, and talked him into leading this project.

Figure 1 above shows cumulative quantity on the horizontal axis on a logarithmic scale, but such a figure can be redrawn with a linear axis, which turns the straight lines into curves. Figure 2 shows such curves for an idealized case: 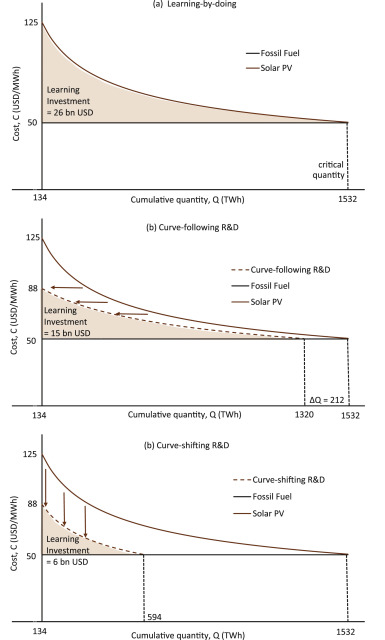 Fig. 2. (from Shayegh et al., 2017) Illustration of two stylized types of R&D for solar PV, a clean energy technology. (a) Learning-by-doing reduces the cost of the clean energy technology as the cumulative quantity of electricity generation increases. (b) Curve-following R&D reduces cost by producing the same knowledge as learning-by-doing, with an effect equivalent to increased cumulative quantity. (c) Curve-shifting R&D reduces cost by producing knowledge that would not have been gained by learning-by-doing, scaling the learning curve downward by a fixed percentage. The learning investment is the total subsidy necessary to reach cost parity with fossil fuels. For the same initial reduction in cost, curve-shifting R&D reduces the learning investment more than curve-following R&D. Note that horizontal and vertical scales are linear. The learning curves would be straight lines if both scales were logarithmic as in Fig. 1.

I am principally a physical scientist, and Soheil Shayagh is principally some sort of mathematically-oriented engineer. To make a successful study, we needed to make some contact with the real world, or at least the academic literature on learning and technological innovation. To this end, we brought Dan Sanchez into the project. Dan thinks a lot about how public policy can help promote innovation and the deployment of new, cleaner energy technologies.

The result of our work was a study titled “Evaluating relative benefits of different types of R&D for clean energy technologies“, published in the journal Energy Policy. (Unfortunately, due to an oversight, our study ended up behind a paywall but you can email me at kcaldeira@carnegiescience.edu to request a copy.)

Our simple calculations are highly idealized and schematic and are designed only to illustrate basic principles.

I infer from our study that, other things equal (and other things are never equal), government funded R&D should focus on trying to achieve step-wise curve-shifting breakthroughs.

I suppose my group’s research should also focus on trying to achieve step-wise breakthroughs, but that’s a tough challenge.